Mrs. Agnes Bertha Marshall (1855 - 1905) was a celebrity cook, equivalent to today's television stars of cookery, who demonstrate and write books, and are personality performers. Her maiden name was Smith. Had there been television in her day, Mrs. Marshall would have without question been a cookery "guru" on the small screen - she was always keen to adopt new technology. Agnes Marshall wrote four books:- 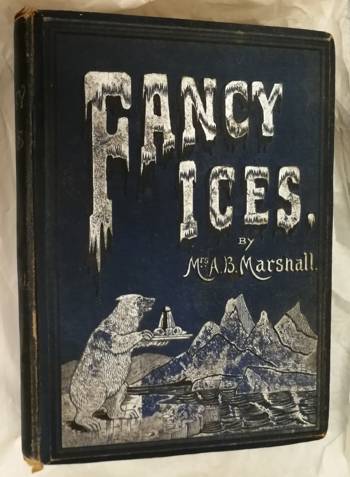 and these are considered to be some of the finest books of their type ever written, especially those on ices, of which Mrs. Marshall was the Queen. Her recipes are clear, accurate, and well illustrated. Mrs. Marshall has been neglected by historians, and is not famous today, unlike Mrs. Beeton, whose work benefited from commercial promotion long after her death. In contrast Mrs. Marshall's family did not make a long term success of her business which included a cookery school, sales of equipment, and invention of machines

She ran a domestic staff agency business, sold domestic and cooking equipment, and ran a successful school of cookery. She campaigned for better standards of food hygiene. In 1886 she started a magazine called "The Table". Agnes toured extensively, lecturing and demonstrating her techniques to huge audiences. Mrs. Marshall can be credited with the invention of the ice cream edible cone, mentioned in her 1888 cookery book, the recipe being "cornets with cream". This predates American claims to the invention in 1904! There are no known earlier references to the edible ice cream cone which nowadays we all take for granted.Her books stimulated demand for imported Norwegian ice which was supplied from the building which is now the London Canal Museum.

The ice cream freezer illustrated was one of Mrs Marshall's own designs. The secret was a wide, flat design that provided more surface area between the vessel containing the cream mixture, and the mixture of ice and salt that created the freezing effect. When crushed ice and salt are mixed, the temperature falls below freezing point. The vessel containing the ice cream mixture needs to be stirred all the time and there is a paddle in the machine that stays still whilst the circular vessel is turned. 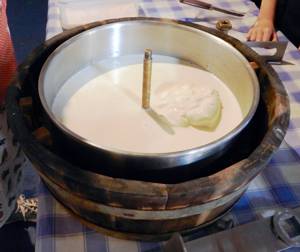 The design was patented in 1885. When the ice cream is made it has to be eaten before it melts or else stored in one of her other designs, the "ice cream cave", an insulated box able to store ice cream for long enough to take on a picnic. The ice-cream maker pictured in use here is a replica.