Home > The Ice House > The Building

The building now occupied by the museum is a former ice warehouse, originally constructed around 1863 to store natural ice imported from Norway.

The Story of the Building 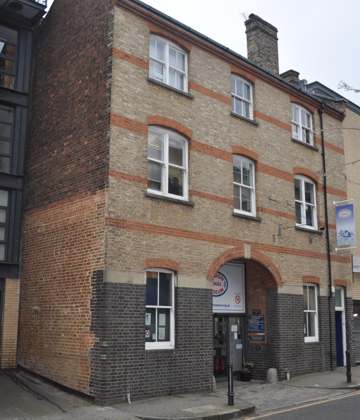 Carlo Gatti (1817-1878) established himself on this site between 1855 and 1858, most probably in 1857, the year in which his first cargo of 400 tons of imported Norwegian natural ice was brought to London. It seems almost certain that this first cargo was stored in an ice well on this site. A second ice well was constructed in 1863, and in the course of this work one of the workmen, John Parker, fell to his death. The side walls of the building probably date from this period, and also the roof of the main hall, which was then without an intermediate floor. 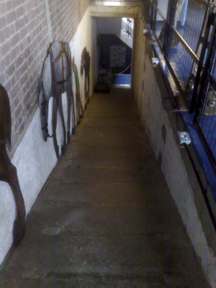 In 1904-6 extensive reconstruction was carried out and the previous buildings adjoining the ice wells were replaced by new ones at the front of the building including residential accommodation for a caretaker, and new drains. The brick piers at the side of the building were constructed (the brickwork is notably different) to enable floors to be put in. During this period of reconstruction the first floor was created for stabling of horses and the horse ramp constructed, so that the building became a carefully designed horse and cart depot. The architect for this work was a Mr. H. Phelps Drew. United Carlo Gatti and Stephenson used the building until 1926, after which it was used by a number of different occupiers for warehousing and light engineering.

During the war the building was used by AEC as a depot for spare parts for London buses. In 1956 there were further alterations to the building including the concrete stairs which now form the main route to the first floor. The stable partitions were removed, though they had probably been disused for many years by this time. The building became an Italian food importer's warehouse. After a period of disuse, the building was taken on by the Canal Museum Trust in 1989 and work was done to make it suitable for use as a museum, but no structural alterations were made. A hole was made in the ground floor to give a view down into the west ice well. Battlebridge Basin, to the rear of the building, was constructed around 1820. The wharves around it were used for a variety of industry such as sawmills, a bottling plant, jam making, and a flour mill.

In 2008 work was done to clean the exterior wall on the south side, removing white paintwork. In 2013 a major maintenance project was undertaken to rectify structural defects in the basement. Three of the 1904-6 piers, constructed on the shoulder of the western ice well, were replaced due to their deteriorating condition. This work was partly funded by the Heritage Lottery Fund. The cause of the cracking of the brickwork could not be determined with complete certainty but it was thought likely to be related to the damp conditions cause by long-term leakage from the canal into the building's basement. In addition, delamination of the concrete had occurred in the soffit, the underside of the ground floor. Beneath the steel joists, rust had forced concrete to crack and break off. This was dealt with by removal of the loose concrete and treatment of the exposed steel. In addition some additional structural supports were fitted in a couple of locations found to be weak.

The building today offers a number of clues to past uses and retains some original features. The fine timber roof is an impressive original construction although it may have been altered slightly in the 1904-6 rebuild. However it is thought to be Victorian. The side walls are also a part of the original building that have survived. The fine frontage is Edwardian, however, being part of the major 1904-6 rebuild. The horse ramp is an interesting feature of the Edwardian building, enabling horses to ascend to the first floor. At one time it was the only route for humans to but a further round of alterations in the mid 1950s say the present main staircase built. 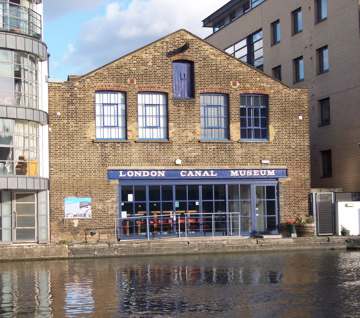 In the entrance is an Avery weighbridge, or the remains of one, the date of which has not been determined. Certainly ice cards were weighed in and out at one time to establish the weight of ice delivered. The two floors constructed in 1904-6 are now the main floors of the museum. The second floor, from 1906 part of the stable-keeper's accommodation, now house office space, and storage rooms for the museum. That part of the stable-keeper's accommodation on the first floor is now the museum's meeting room, kitchen, and furniture store room, and houses toilets that date from the 1950s. 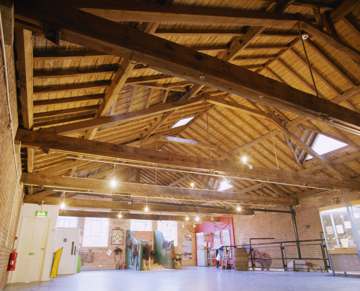 The rear elevation is probably of similar appearance to the building in the 19th and 20th centuries but we do not have any detailed records. In the 2000s the glazed screen at the back of the ground floor was replaced with a steel and glass structure designed to look much the same as the previous timber framework.