The History of ice Cream

It has often been said that the Chinese invented ice cream and that marco polo brought the idea to Europe in the thirteenth century. This is more myth than historical fact backed by evidence but it can be sated with some confidence that ice cream was invented in China in the first milenium. The process of freezing liquids by immersing them in a mixture of ice and salt, which react together to lower the temperature of the mixture below freezing point, was also invented in the distant past - it was first documented in the thirteenth century. This is how ice cream had to be made until the invention of the freezer in the twentieth century. A vessel containing ice and salt surrounds a container containing the ice cream mixture. The temperature in the ice and salt mix drops, freezing the container's contents. To ensure it freezes evenly, it is generally stirred or rotated.

Since the method of producing ice cream depended on a supply of ice, it was of limited use without that precious commodity. Ice could be gathered from ponds and lakes, in winter, and the storage of ice in ice wells and ice houses goes back several centuries. By packing ice into an insulated underground chamber with adequate drainage ice could be stored for months, sometimes years. Ice remained a luxury and dependant on nature to produce it, and cumbersome methods to harvest it.

Ice cream made with a milk mixture was first recorded in Europe in Italy.. In England, the first recorded serving of this rare luxury was in 1672, to King Charles II, whose table at a banquet was served a delight denied to those sitting at more humble tables. The first English cookery book to give a recipe was Mrs Mary Eales Receipts of 1718. The recipe did not include a process for making the ice smooth and it must hve been coarse with ice crystals. Ice being rare, ice cream was a luxury for the well off in all countries and had to be made and served immediately, there being no way to store it for any great time.

The second half of the nineteenth century was the period in which ice cream became a treat for ordinary people. Italy continued to lead Europe in ice cremery and immigrants to the UK from thee broughtwith them a tradition and expertise which led to the popular name "Hokey Pokey" which is thought to derive from a corruption of the Italian for "try a little". In other countries too, especially the United States, ice cream gained popularity. The commercial harvesting of ice in cold climates and its transport to population centres was a growth area from the earl nineteenth century. 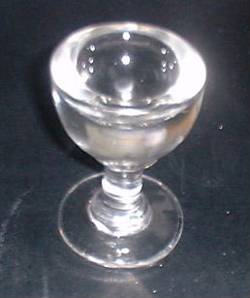 This ice trade made large volumes of ice available at a realistic price and it became possible for ice cream sellers to offer a taste of ice cream to the ordinary person. Ice was sold on glasses which were wiped clean and re-used. These glass "licks" remained in use in London until they were made illegal in 1926 for reasons of public health. Ice cream edible cones were first documented by Mrs Agnes Marshall in her book Fancy Ices of 1894.

The first ice cream bicycles in London were used by Walls in London in about 1923. Cecil Rodd of Walls came up with the slogan "Stop Me and Buy One" after his experiments with doorstep selling in London. In 1924 they expanded the business, setting up new manufacturing facilities and ordering 50 new tricycles. Sales in 1924 were £13,719, in 1927 £444,000. During the war years (1939-45) manufacture of ice cream was severely curtailed, and the tricycles requisitioned for use at military installations. In October 1947 Walls sold 3,300 tricycles and invested in freezers for shops.